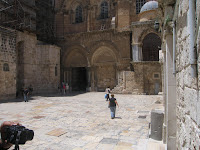 I stumbled across an interesting article in the Israeli newspaper, Haaretz, which by the way is an excellent source of news about Israel and its struggle with Palestinian nationalism. The article describes how Arab Christian clergyman, representing a tiny minority of Palestinians in the Occupied Territories, are now being prevented from traveling easily from church to church in the lands they minister. Now, Israel has always limited movement of Palestinians in the lands they occupy militarily, mostly in rather cruel and overbearing ways, but in this case Christians, whom Israel has historically supported in Arab lands, are now bearing the brunt of these restrictions imposed on the non-Jewish majority in the West Bank and Gaza. My point is, since American Christian groups are quick to cry foul when they feel their rights to practice their religion are trampled upon, I would hope they would file formal complaints with the Israeli government on the treatment of Arab Christian ministers. And perhaps some will protest; my faith in the human race to express support for oppressed peoples remains strong. But given the recent lovefests between American Christian groups and Israeli Zionists, a bizarre, self-serving relationship if there ever was once, I am afraid this violation of the right of Christians to practice their religion in the lands of their birth might go unnoticed. The pictures in this section are ones I took at the Church of the Holy Sepulchure in Jerusalem. The massive edifice is a testament to the significance Jerusalem and its environs should hold for the Christians of the world. Let's hope that Israel's propaganda allies in the American Christian Church, mostly a conglomerate of ultra-rich, rabid right-wing Evangelical sects, step right up and condemn the restrictions imposed on their brothers in the future Palestinian state. Read the article: