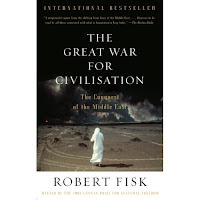 It's high time I update this blog. Sorry for the delay. Not that anyone ever reads it, although I do get comments from students about it. Ah, yes, those Enloe students. I send them with great regularity to kandah.org to get their assignments, and they notice the lack of updates at the main page. So astute they are.

I recently completed the book The Great War for Civilization: The Conquest of the Middle East, by the incomparable Robert Fisk. He's a correspondent for the British newspaper the Independent, and he's based in the Middle East and has been for many a year. Robert Fisk has been covering wars in the all the tormented regions of the Middle East for years, and his firsthand accounts of the atrocities and the politics and the bloodthirsty megalomania of the conflicts' main players are unsparing and without peer. The most astounding aspect of this dense and compelling book is the thread that winds its way throughout: the Western powers' zeal to control and manage the regions according to its own geopolitical goals has resulted time and again in failure. Nobody has been able to force the Arabs and Persians to bend completely to the will of the Western powers, and current attempts to forge new realities on the ground in Iraq and Afghanistan through military means is yet another example of the failures of Anglo-American foreign policy folly. We in the West simply continually to repeat mistakes of the past. We support corrupt dictators, and when they begin to put the interest of the countrymen above that of the American interests, we work, either explicitly or covertly to undermine and take down the regime. It's depressing, this book is, but Americans need to know how bankrupt American foreign policy is the primary cause of the regions current political malaise. 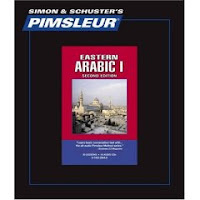 I am working my way through a Pimsleur series of language CDs, namely, Eastern Arabic I. My familiarity with this particular dialect of Arabic is generally advanced, but I thought I could benefit from a more aural, formalized course of study in the language. The dialect offered in this particular series is closer to that spoken in say Damascus Syria than the one I would be more exposed to in Palestine, but I am skilled enough the appropriate lexical and pronunciation adjustments. I would recommend the series. Makes for decent listening on my 45 minute jaunt to work very morning.
Posted by Mr. Kandah at 4:02 PM No comments: